In the summer of 2013, our college planned a trip for us to the hill town of Dharamshala in Himachal Pradesh. The known history of this ancient hill station tracks the traces of Buddhism since the 8th century. Dharamshala or literally, the inn attached to a temple, has Kangra as its district headquarters. 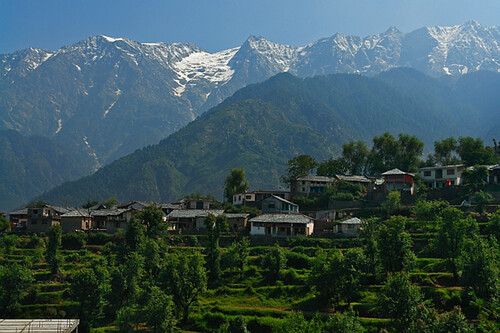 We set out on a train from Delhi and de-boarded at Pathankot, which is the nearest major railway station to Mc Leod Ganj. The distance of 88 kms between Pathankot and McLeod Ganj was covered by bus. These three hours on the road were truly mesmerising and it gave us an idea about the beauty we were about to unravel. One thing that struck all of us from the cities was how small and easy- going the town was. All we needed was to wear our overcoats and shoes to walk around the whole of the hill station.

We started our local tour by first exploring the Lower Dharamshala which basically is the commercial area and has the schools, hospitals, government and other offices. Though there is not much to this part of the town from a tourist’s perspective but out trip here was aimed at knowing the locals and their lives along with enjoying the aspects of fun.

Once we were done exploring the local side of Dharamshala, we headed back to McLeod Ganj or the Upper Dharamshala. It was Sir Donald Friell McLeod after whom this part of the hill station was named. This is where the much known Tibetan community lives and is also the seat of attraction for visitors.

Since we were on our college trip, we had on our itinerary all the spots that have put Dharamshala on the tourist map. Starting from the Naam Art Gallery’s paintings to the Tsuglagkhang Complex and the Tibet Museum along with the Tibetan Library and the outdoorsy spots like Bhagsunag Falls, we visited all of them and in the end, could only marvel at the beauty of it all.

We dedicated one day for a day- time picnic at Dharamkot which was only a 14 km ride away from the main town. It is known for being placed such that it is surrounded by stunning natural views. After the fun- filled day and spending some time trekking near the Bhagsunag Falls, we were ready to see the Dalai Lama and the experience was indeed one we are all going to remember all our lives.

And how could our trip come to an end without adding the adventure element in form of para- gliding? After engaging ourselves in some thrilling gliding hours, it was time to bid goodbye to this dream world, complete with awe, adventure and of course, yummy food!