Hilly terrain, cascading waterfalls, low- lying clouds and the apple orchards; Manali has it all!

Come prepared and lose yourself in the forest-y indulgences. This ‘Valley of Gods’ is a part of the Valley of River Beas and the crackling river water is the source of merriment- both as a natural retreat as well as an adventure provider.

The mystic town of Manali , a welcome refreshment to you as a traveler or tourist, has a lot to offer. The spellbinding beauty of the land of ‘Home of Manu’ is bejeweled with spectacular valleys and mountain trails. The area within the town and around, is home to a rich cultural and natural heritage.

The Manali Sanctuary is a testimony to the nature’s abundance in the Manali district. For wildlife enthusiasts, this sanctuary could be an answer to their quest in understanding the wild. Traversing through the thick forest of Deodar, Oak, Walnut, Maple, horse Chestnut and Kail, you will witness the Mother Nature as she is. Cross the paths with animals like Musk Deer, Brown Beer, Snow Leopards and the likes and while trekking through the greens, give yourself to the wonderment of nature.

Another spectacular spot is the Pandoh Dam, en-route the NH 21. This man- made marvel made of earth and rocks is and embankment on River Beas and offers a panoramic view to all those who stop over on their drive through the route.

The Kullu- Manali region has found its place on the world map. While you are in Manali, apart from enjoying the local indulgences, set out and explore.

The Rohtang Pass, meaning ‘a pile of corpses’ in the local language, christened so because of the surprise blizzards, storms and landslides that hit this pass, in spite of not being dangerously high, making it a herculean task for anyone to cross it. It is the connecting link between the Kullu Valley and the Lahul-Spiti Valleys and is covered under a constant cover of thick white snow- even in the months of summer. Once you have attained the permit for passing over the pass, no other adventure can beat this once in a life time experience. 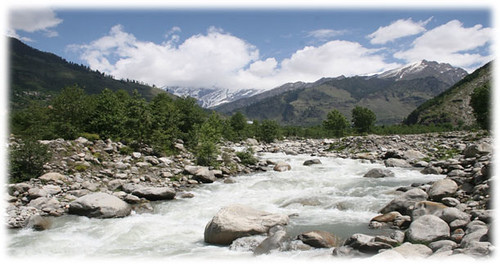 Travelling through the path to reach Rohtang Pass, you would want to stop over at the Solang Nala Valley. The perfect terrain and weather conditions here have made it famous among those looking for some thrilling activities during summer or even winters. Go for Parachuting or Zorbing or Ice- Skating or Para-gliding and what not!

There is something for the religious sould too- the HIdimba Devi Temple sitting amidst a thick cover of Deodar Trees, evidently has in its abode the footprints of a deity. A visit to the temple while the celebrations for Dussehra are underway will do justice to its true essence. Another religious hotspot is the Bijli Mahadev temple, located near the Kullu valley, up the Halleni Village. The belief is that this temple of metal at the height of 60 ft., attracts the lightening and each of these are considered as the god’s blessing, destorting the Shiva Linga, which is then filled up using Sattu and Butter.Manali is the complete package of leisure, adventure and spiritualism.